New Doors for the Trolley Car

For years while the Philadelphia Suburban Transportation Company’s

“Red Arrow Lines” trolley car shops were located on West Chester Pike in Llanerch (where Kohls is now located), Red Arrow employees did all maintenance, repainted the cars, etc.  However, when a trolley car needed new doors made, they turned to a company which was right around the corner and is still serving the community today – Beatty Lumber.   When Trolley Car #23 arrived back in Newtown Square, some of the wooden doors were gone, and the others deteriorated beyond repair.

Almost 50 Years after the Red Arrow’s Llanerch car shops closed down, Beatty Lumber stepped up to help out one more trolley car with new doors.

Beatty Lumber & Millwork Company was established and opened for business at its present location in Upper Darby in September of 1923.  When reached out to, the president of the company (grandson of the original owner) was anxious to help.  They carefully measured and studied drawings and images the museum had obtained and have helped to produce new doors that look identical to the originals.  They have also supplied the wood used to replace the roof and have been exceptionally generous during the project.  Perhaps more historically significant is that one cannot get more “original” than having a company who made replacement doors 70 years ago help to facilitate having them made once again - a noteworthy local history connection. 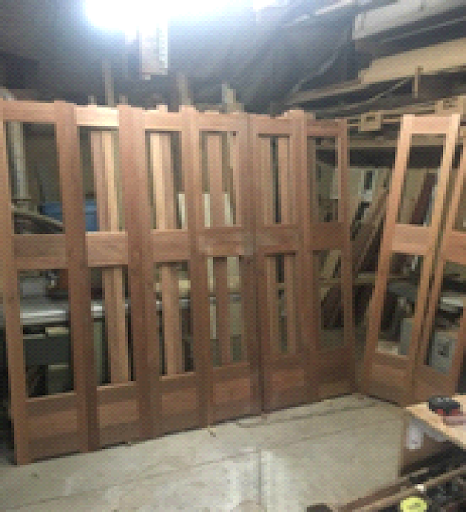 In another historical connection to our museum, Beatty Lumber had a railroad siding on their property from which they received and shipped lumber for many years.  That siding was off of the Newtown Square Branch of the Pennsylvania Railroad!

Painting the doors, cleaning and mounting the hardware and then hanging the doors will be a significant effort but is hopefully to be done soon.  Local company Glen Haydt Glass fabricated the replacement glass that was needed for the broken windows and will cut the glass for the new doors as well.  The Newtown Square Pennsylvania Railroad Museum is grateful to Beatty Lumber and to all the people and businesses who are helping in any way that they can to restore Philadelphia Suburban Transportation Company’s #23.  We are getting there an inch at a time!